As a dedicated educator committed to his community, Dr. Siver taught in Southfield Public Schools for 45 years, served as deputy superintendent, and managed the district’s operations and facilities. In addition to his commitment to students and their education, he also previously served as a member of the Southfield City Council from 2001 to 2015. He was recently elected Mayor with his term beginning in January of 2016.

In 2010, Dr. Siver joined the Southfield Non-Profit Housing Board with one goal in mind — improving the living conditions of seniors with restricted incomes residing in McDonnell Tower, River Park Place and Woodridge Apartments.

A resident of Southfield for 49 years, Dr. Siver’s former experiences in education, operations and facilities, and in public service for the city of Southfield have all been an asset in his current role as president of the Southfield Non-Profit Housing Board. In that role, he is responsible for overseeing management of the board’s properties.[divider_top]

Mitchell is a retired certified public accountant with more than 43 years of experience. He previously served as president of the Accountants Guild, and for the Detroit Executive Association.

Mitchell holds the distinction of “original member,” selected by the Southfield City Council for that city’s Commission on Senior Adults. He served on the Commission for 27 years, and was its chairperson twice.

Committed to his community, Mitchell coached hardball baseball for 35 years for travel teams and local communities, including at the high school level and for American Legion Baseball. More recently, he lends his talents serving as treasurer for the Southfield Non-Profit Housing Board.

Mitchell is married to his wife of 48 years, and they have two children and three grandchildren.[divider_top]

As Vice President of Asset Management of Larc Community Development Group, Lora Brantley-Gilbert is responsible for the overall performance of the Larc portfolio. Working with management agents on all aspects of daily operations and management of the 3,600+ unit portfolio, located throughout S. E. Michigan, and in Pennsylvania and Georgia.

Prior to joining Larc Community Development Group in November of 2010, Lora served as the Regional Vice President for National Church Residences, Inc., (the nation’s largest not-for-profit provider of affordable senior housing). In this role as Senior Executive in charge of the Michigan office, she managed a portfolio totaling 4,200 units in 30 apartment communities throughout S. E. Michigan and in Ohio.

Lora is a member of; the Institute of Real Estate Management (IREM), the National Leased Housing Association (NLHA) and the Georgia Affordable Housing Coalition. Mrs. Gilbert serves as the Secretary on the Board of the Southfield Non-Profit Housing Corporation.[divider_top]

Fred serves as city administrator for the City of Southfield. In that role he is responsible for the day-to-day management of Southfield’s general fund of $67 million (part of a $176 million total budget) and more than 600 employees.

Fred has extensive public administration and housing experience. Prior to his role with the city of Southfield, he served as executive director of Housing and Neighborhood Development Services for the City of Taylor. In that capacity, his responsibilities included oversight of the Taylor Community Development Corporation (aka the Villages of Taylor), Taylor Cares, LLC program, the Taylor Housing Commission, and the HOME Consortium. Fred also served as that city’s executive director of economic and development services, which included administrative activities relating to Tax Increment Finance Authority (TIFA), Downtown Development Authority, the Brownfield Redevelopment Authority, Planning Department, Building Department, as well as ordinance enforcement. Fred also led efforts surrounding the redevelopment of the Villages of Taylor, and served as president for the Taylor Community Development Corporation. His previous roles also include associate director for M. Shapiro Development, LLC, controller for the City of Melvindale, and deputy director of economic development for the Downriver Community Conference.

Fred is a founding member of the Michigan Suburbs Alliance (MSA) Redevelopment Ready Communities (RRC) steering committee, a nonprofit coalition of 32 inner-ring suburbs. RRC is one of the nation’s first initiatives to measure a city’s or county’s progress toward “redevelopment readiness,” with a certification program that brings with it the expertise of a steering committee comprised of developers, planners, advocates, and government officials. Using a set of best practices and technical assistance, RRC helps localities build deliberate, fair, and consistent development processes from the inside out, and effectively communicate about them.

Earlene brings expertise in long-term care services for seniors, the mentally ill and disabled populations. She is certified in gerontology and has worked in that discipline for more than 25 years in a variety of roles and for organizations including executive director and CEO of the Detroit Wayne County Long Term Care Connection, and project director for Adult Well Being Services. She also previously held leadership roles with the Detroit Area Agency on Aging, where she served as director of Project C.A.R.E., director of the Nursing Facilities Transition Initiative, and director of senior housing. In that role, she served as facilitator for the Senior Housing Committee Board of Directors.

A strong advocate for seniors and the physically disabled, Earlene previously chaired the Subcommittee for the Michigan State Housing Development Authority. In that role, she addressed a broad scope of services that supported tenants’ ability to age in place. She also advocated to reinstate Section 8 housing vouchers, and assisted those in need in securing affordable housing.

Earlene’s résumé also includes governmental experience working previously for both a former governor and mayor. She is also a past president of the University of Michigan’s School of Social Work Board of Governors, which included membership on the University’s Board of Regents.

Earlene is very active in many organizations including the City of Southfield Commission on Senior Adults, and the Southfield Non-Profit Housing Board.[divider_top]

Since April 2015, Michael “Ari” Mandelbaum has served as councilman for the City of Southfield, and currently serves as a board member for the Southfield Non-Profit Housing Board. Michael also previously served on the city’s Total Living Commission for six years, including four years as its chairman, working to improve the quality of life for residents. As a longtime Southfield resident, Michael utilizes his experiences on the Commission and as a community advocate to improve the city. He regularly promotes Southfield as an exceptional environment to raise children, a place where residents can prosper, and where businesses can excel. His goal is to make the City of Southfield the premier destination to work, live and play.

Michael holds a Masters of Business Administration from Wayne State University, with a concentration in Management and Marketing. He also holds a Graduate Certificate in Project Management from Lawrence Technological University. Michael works as a senior analyst for Blue Cross Blue Shield of Michigan, supporting projects and compliance initiatives as they relate to health care reform mandates. He is also a lead business course instructor for the Michigan Jewish Institute.

Michael is involved in many charities, and actively participates on boards for many other organizations. He is a member of the Dr. Martin Luther King Jr. Task Force, and was also named one of Oakland County Executive’s Elite 40 Under 40™ in 2014.

Michael is married to Bina, and they have three children.[divider_top] 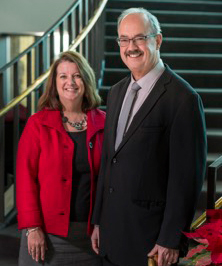